First Draft of Her Hollywood 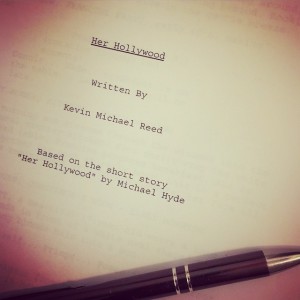 A couple weeks ago, I finished writing the first draft (and a necessary rewrite) of “Her Hollywood,” a feature-length screenplay based on a short story, of the same name, by Michael Hyde. I first read Michael’s piece in the Summer of 2014 and the story just wouldn’t leave my mind. The original text was written so vividly that a film came alive in my mind, maybe that’s why “What Are You Afraid Of?“, the book “Her Hollywood” was published in (published by the University of North Texas Press), won the Katherine Anne Porter Prize in Short Fiction.

The story deals with some sensitive, yet timely, issues including rape, sexual fantasy, mental illness and, to a certain extent, bullying through the eyes of a teenage girl who becomes obsessed with the rape and murder of a popular girl in town. She will go to any length to become “one of the pretty ones” because as her mother says, “it’s always the pretty ones that die.”

As time went on, I read Michael’s “Her Hollywood” several times and took notes on what I felt was most important about the story. I was also trying to figure out what was drawing me to it. It’s not a “happy go lucky” story, it’s dark. And I knew it would be a challenge to write.

By the time I was done with my previous project (December 2014), I knew this was my next screenwriting project. At the time, I was finishing my BFA in Photography and the Digital Image, with minors in English and the History of Art, at the Fashion Institute of Technology. I was introduced to the short by English Professor Amy Lemmon (an amazing poet, by the way). I reached out to her because I knew that many of the works we read in her creative writing class were written by people she knew. Google would have given me the same result, but I soon learned that Michael Hyde was also a Professor at FIT. I asked Amy to provide an introduction.

A couple weeks later, I sat down with Michael Hyde at a small coffee shop on 27th Street in Manhattan (the now out of business, Moda). He knew I was considering (though really, I was past the point of considering) writing this screenplay.

I did know the story – it was almost engrained in my mind – and, just to make sure that was the case, I speed read it again 10 minutes before meeting him.

At the end of the meeting, he asked if he could think about it over the winter break before making a decision. This story was special to him — after all, it was included in his first book — I understood.

As soon as the break was over, I emailed him and quickly received his blessing.

The next hurdle would be to negotiate an option for the theatrical rights to the story from the publisher, University of North Texas Press. I, almost immediately, realized that I was not up to task to be negotiating with the publisher and brought on Barry J. Heyman of Heyman Law in NYC to handle the negotiation process.

I can’t publicly disclose the details, but, by April, I had an option agreement in hand.

Now the truth is, I couldn’t wait to get started working on the project. As soon as the negotiations began in February, I started working away. By April, I was already well passed the point of no return developing an outline and synopsis of the screenplay. (Thank God, we got the rights!)

During my meeting with Michael in December 2014, he was surprised that I was going to turn 12 pages into a feature-length screenplay. His immediate thought was that it would be a short. “You’re going to have to write a lot of dialogue,” he said. “Yeah, I know, but I’ll stay as true to the story as possible,” I replied. I think that was his way of testing me. I did have to write a lot of dialogue, hundreds of lines of dialogue and the original framework of the story had to be expanded. I had to take the world that Michael had created and expand it.

I think it’s why, even though I was so passionate about the project, it took me so long to develop the outline and synopsis. I struggled a bit early on with the idea that I had to make Michael’s story my own. He had written the framework, the source, the guidelines, but I had to take it and make it something even more. I didn’t have the luxury of narration that fiction writers have. It had to be even more visual, It had to have even more subtext, and it had to tell even more of the story with new supporting characters and events that would make the story work as a film.

By late July, the first draft was done. It was rough and though I worked from an outline and synopsis, I really found the story while I was writing the script. That being said, I had to go back and immediately get through a rewrite (to make the story work) before I could ask anyone to read.

Which brings me to this point, a bit more than a year after I first discovered “Her Hollywood”. I’m finally getting some feedback from some trusted industry professionals on this passion project.

One of my trusted mentors (a talented and produced screenwriter himself) wrote back to me yesterday, “I enjoyed reading Her Hollywood. I was engaged throughout. It’s a good read of tangled character relationships with many twists and surprises in the story. [Your Protagonist] is a terrific character – complex and unpredictable. Her change from mouse to monster is well handled. [Her Brother] is a compelling and empathetic character that both surprises and scares us. Both characters should attract talented actors.”

That is what we want when writing a screenplay, right? Characters that attract talent.