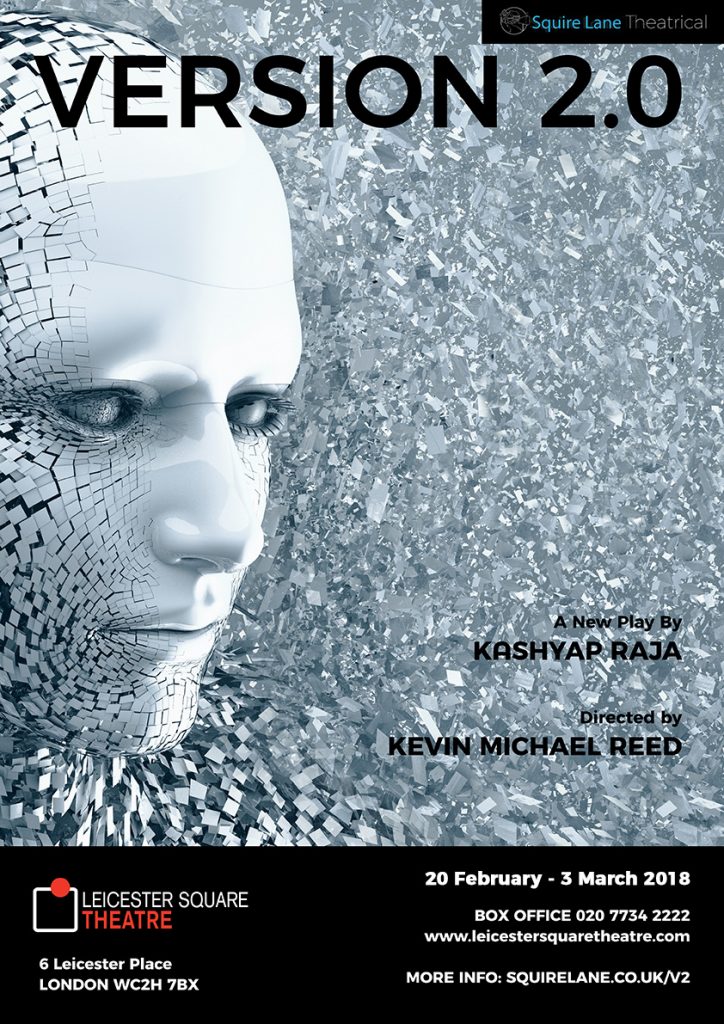 From the team that brought the critically acclaimed productions of Reese Thompson’s WHORE: A Kid’s Playand Joy Donze: 13 & Not Pregnant to the 2017 Edinburgh Festival Fringe, and Shadows at Theatro Technis, London, in 2017. In new play Version 2.0, issues of female consent and robotics are thrown together in this timely new piece challenging the superficiality of modern society, opening at the Leicester Square Theatre in February 2018, directed by Kevin Michael Reed and written by Kashyap Raja.

Kash (Tim Atkinson), a playwright, is obsessively in love with his childhood friend Karen. Kash silently expresses his love for Karen (Tracey Pickup) by writing plays for her and she returns his admiration by acting in them. Their enduring friendship falls apart when Karen rejects Kash, infuriating him to such an extent that he refuses to see her again. After the rejection, he isolates himself from everyone and gradually falls into a depression.

A robotic society offers Kash an opportunity to live with a humanoid companion, and in return that society wants him to introduce their robots to the world via the means of theatre. Kash accepts the invitation and creates a robot that looks exactly like Karen. He prepares a new show with the humanoid look-alike of Karen and presents her in front of a live audience.

“We seem to think we know people just by being “friends” with them on Facebook, but those idealized worlds presented are not truth. When placed in the wrong hands, those worlds are dangerous.” ~ Director Kevin Michael Reed

“We are propelled into a world where anyone can order a humanoid on Amazon, not only that, but they can also design every aspect of them to their liking.” Saskia Coomber, A Younger Theatre.

★★★★ “Version 2.0 is a thematically dense play, that […] lends itself to the assumption that the author wants to draw comparisons between ‘fact’ and ‘fiction, and the emotional ‘truth’ that lies between.” Michael Davis, Breaking The Fourth Wall.

“under the direction of Kevin Michael Reed the heavier moments are well done” Saskia Coomber, A Younger Theatre.

★★★ “This play is a bit unusual, in a nice way. I enjoyed the dialogue and the performances of the actors, especially of the neurotic Kash played by Tim Atkinson and Karen (Tracey Pickup) who flips from the ‘normal’ Karen to the robot one.” London Theatre Reviews.


★★★★ “shows ‘history repeating itself’ so that the audience can judge for itself why certain events took place.” Michael Davis, Breaking The Fourth Wall

★★★★ “this piece excels in is its commentary in the wake of Weinstein and the various assault cases recently brought to light.” Veronica Stein, Reviewsgate.com

★★★★ “The pair’s chemistry is undeniable, and watching them work the crowd is one of the main pleasures of Version 2.0. ” Veronica Stein, Reviewsgate.com.

★★★★ “Pickup’s performance acts as the conduit for the audience, naturally eliciting our sympathies and through her have a sounding board for Kash’s actions.” Michael Davis, Breaking The Fourth Wall.

★★★★ “Version 2.0 takes a good look at what advanced technology can do to our future relationships- more impressive is the astute observation of what’s wrong with them now.” Veronica Stein, Reviewsgate.com.

★★★★★ “Tracey Pickup’s performance is absolutely superb. Switching between humanoid and human personality with ease, gorgeous smile, so pretty, such a spectrum of expressions. Excellent work!”

★★★★ “I enjoyed this a lot. It’s a nice cosy theatre and the closeness of actors really makes it immersive. The play itself is very interesting, dealing with both AI related and very human topics. Definitely recommend seeing it.”

★★★★ “Have to applaud the talent of the two actors, flawless and seasoned performances. The story is a quirky one yet that keeps you focused on the characters. I enjoyed seeing Karen flick from human to robot. She plays it perfectly. Very enjoyable.”

★★★★ “An intriguing play about a portrait of the love life of a young man. Frighteningly realistic and quite heartbreaking. Well acted and a tragic commentary on today’s society.”